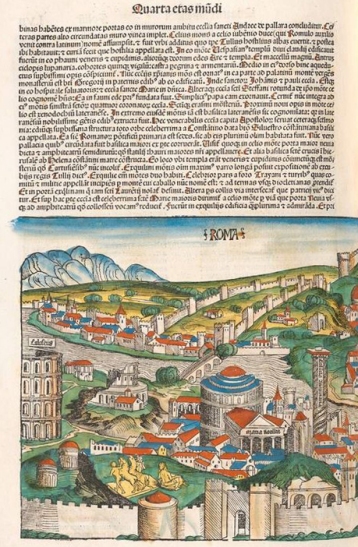 The World Chronicle of the German physician and humanist Hartmann Schedel (1440-1514), first printed in 1493, was a huge success on the publishing market. Its major allure were the illustrations: more than 1,800 woodcuts depicted biblical and historical events as well as views of towns. Since the book was so costly, its copies were also jealously preserved by their successive owners. This resulted in a particularly high “survival rate” and explains why 1,300 copies of the Latin edition and 400 of the German edition are still extant in public and private libraries around the world. An exhibition at the Bavarian State Library in Munich was organized to celebrate the 500th anniversary of the death of the Chronicle’s author. It was a doubly ambitious project. First, it aimed to shed light on Schedel’s biography; second, it intended to present his private library, which he had used to compile his World Chronicle. The organizers approached this double aim by arranging the exhibits chronologically along the course of Schedel’s life, showing, for example, books he read as a student in Padua, texts he used to expand his knowledge as a physician in Germany, and many examples of his wide-ranging curiosity as a collector. His interests ranged, to cite only a few, from classical literature, philosophy, history and geography to medicine, law and theology. Among the most fascinating documents are, for example, booklists he obtained from Rome during his hunt for incunables (pp. 101-04). A core challenge of the exhibition was to elucidate the sources and working methods of Schedel in compiling his World Chronicle. This fascinating goal is not completely reached but, so to speak, dangled before the readers’ eyes. We are not carried, in this respect, very far beyond what was already known, namely that Schedel was strongly influenced by contemporary Italian writers such as Enea Silvio Piccolomini, Biondo Flavio, Bartolomeo Platina and Giacomo Filippo Foresti (see, e.g., the entry on Schedel in Deutscher Humanismus 1480-1520: Verfasserlexikon, ed. F. J. Worstbrock, vol. 2, Berlin 2013, cols 819-40). In Worlds of Learning, Bernd Posselt (“The World Chronicle and Its Sources,” pp. 117–20) draws on his doctoral dissertation completed in Munich in 2013, touching on how Schedel’s Chronicle integrated religious content (such as events in ecclesiastical history and Church-state relations) with world history (the six ages of the world, followed by the appearance of the antichrist and the Last Judgment). More details can now be found in the published version of this dissertation (Bernd Posselt, Konzeption und Kompilation der Schedelschen Weltchronik, Wiesbaden 2015).

This exhibition catalogue throws up many stimulating questions regarding the world-view of a private book collector of the Renaissance. Like Schedel’s illustrated Chronicle itself (which was published in German and Latin), the exhibition catalogue, too, is both beautifully illustrated and available in two languages (German and English). The English edition will be welcomed – like Schedel’s Latin version of 1493 – by an international audience.

It should be noted that over 90 manuscripts and almost 350 incunables from Schedel’s collection can now be consulted online via the Digital Collections of the Bayerische Staatsbibliothek. While for the manuscripts there is a dedicated web page (“Schedel, Hartmann: Liber chronicarum. Digital Collections”), the incunables are found via the “BSB-Ink” Catalogue of Incunabula, inserting Schedel in the search field “Provenienz”. These online resources include access to Schedel’s personal copy of his Chronicle (http://daten.digitale-sammlungen.de/~db/0003/bsb00034024/images); it is adorned by meticulous colouring and contains handwritten annotations as well some unique additions (see also pp. 18-19).